THE COMPANY AND THE PROJECT

SANDALO (Sociedad ANdaluza De Almacenamientos LOgisticos) is the company that runs the high bay warehouse (HBWH) and distribution centre (DC) for RENDELSUR. Rendelsur is one of the largest independent Coca-Cola bottlers in Spain with two plants located in Seville and Malaga (Comesur). Sandalo was founded in 2003 with two goals: to improve Rendelsur’s distribution operations, and to be a third party distributor of finished products.

The purpose of the project was to eliminate the regional DCs by serving local distributors directly from a single warehouse. System Logistics designed the new plant, which consists of two main areas: one for the storage and shipping of full and mixed pallets, and one dedicated to the management of goods-to-man picking operations.

The plant contains 19 double-masted, double-pallet, single depth stacker cranes 30.5 meters as well as 65,000 pallet locations on a self-cladding HBWH. The system is able to deal with different pallet sizes (including the half pallet and Coca-Cola pallet size).

The manual picking operations are guided by the goods-to-man concept, that include Steady Picking Locations (SPL) with 6 picking bays and SVL buffers to manage about 60 class-A SKUs. This area is served by two single-mast, single-pallet, and single-depth stacker cranes 14 meters high to serve approximately 2,500 pallet locations in a separate picking warehouse. Thanks to the SVL system, developed exclusively by System Logistics, the customer can easily manage a high rotation of SKUs while processing a large number of picking lines per day with only two additional stacker cranes. The dispatching area is connected to the warehouse by two loops of 20 SVL shuttles to deliver pallets to 19 shipping docks. It is equipped with 19 bays for just-in-time shipping operations. The shipping area is characterized by a special trucks load mode, that permits Sandalo to deal with 20 trucks simultaneously.

During the year 2013, a new and fully automated distribution centre was created with the aim of boosting the plant efficiency as a consequence of increased productivity. This second expansion allowed the Spanish logistics company to serve - via a single platform and on behalf of Coca-Cola Iberian Partners - all the Ho.Re.Ca sales points and the Department Stores in the major 15 towns in the South of Spain. Distribution is therefore implemented avoiding any intermediate steps through regional distribution centres and using the local distributors as cross-docking platforms.

The new distribution centre is arranged on three different heights. The system prepares 325 outgoing shipments per day, handling approximately 2,500 SKUs and receives on pallets both the Coca-Cola branded products coming directly from the connected bottling lines or from other production sites, as well as other products from external producers. The intensive storage area consists of a self-supporting structure, 32 metres high, where 33 stacking cranes operate. The total storage capacity amounts to 110,000 pallet slots. The order management activity involves 3,000 order lines per day and is fully automated for almost all SKUs. Picking may be performed by layers, packages or individual items, using fully automated means such as depalletizers or with semi-automatic methods (goods to man). The shipping area is connected to the automated storage warehouse by means of 3 loops, where 32 SVLs (System Vehicle Loop) transport the ready pallets by means of roller conveyors. 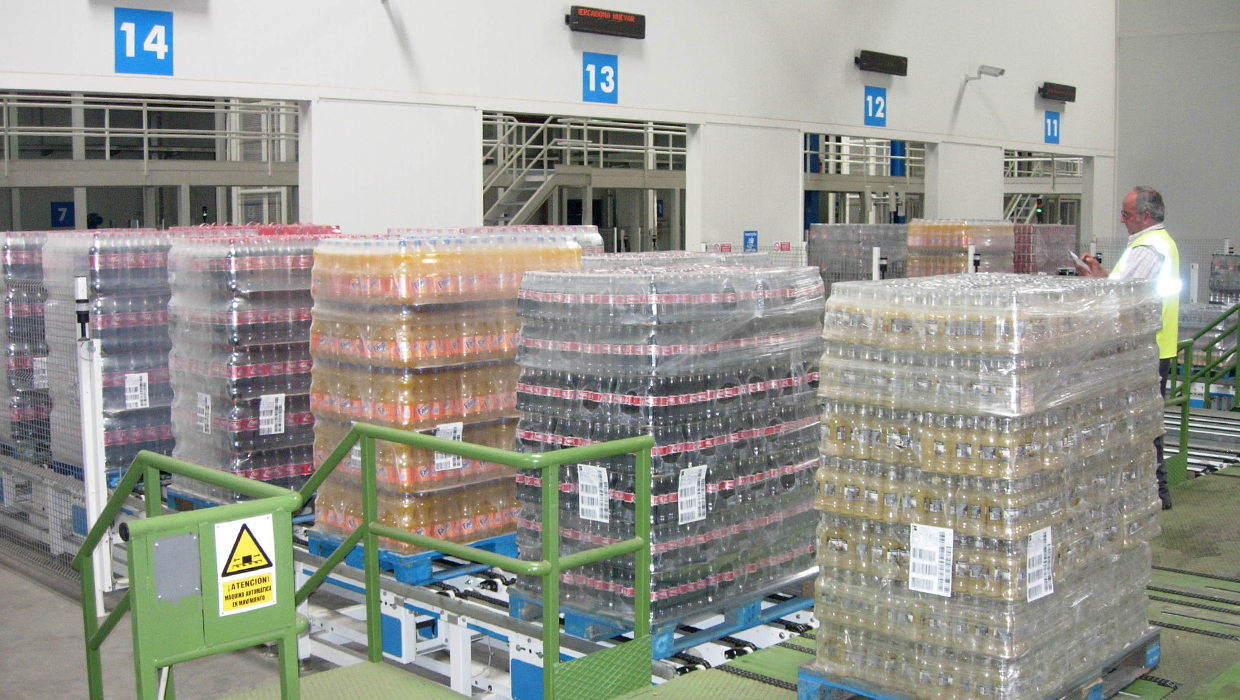